Rudolf Bernegger was born on March 16, 1856 and confirmed in the Catholic faith on May 29, 1872, at the age of 16. According to his confirmation certificate, he was confirmed in the municipality of Altstädten in the canton of St. Gallen. Around 1879, Rudolf married Anna Ursula Ackermann and on March 3. 1880, Anna gave birth to Johann Rudolf Bernegger. A later record claims he was born in Winkel, which is a small town in the shadow the Alps in the canton of Zurich, in the northern part of the county.

​A small, mountainous nation, Switzerland had little agricultural land so frequent economic recessions made it challenging for its growing population to find enough to eat. During these times, such as the decade starting in 1880, local councils might offer families as much as 400 Swiss francs to emigrate to the New World.

A young man, Rudolf may have taken such an offer to emigrate to the United States. In any event, in 1880, he set off to the new world. Rudolf travelled alone to New York, Given the high expense of travel, his wife and son may have had to remain in Switzerland until Rudolf secured a home for the family and had saved enough money to pay for their passage. 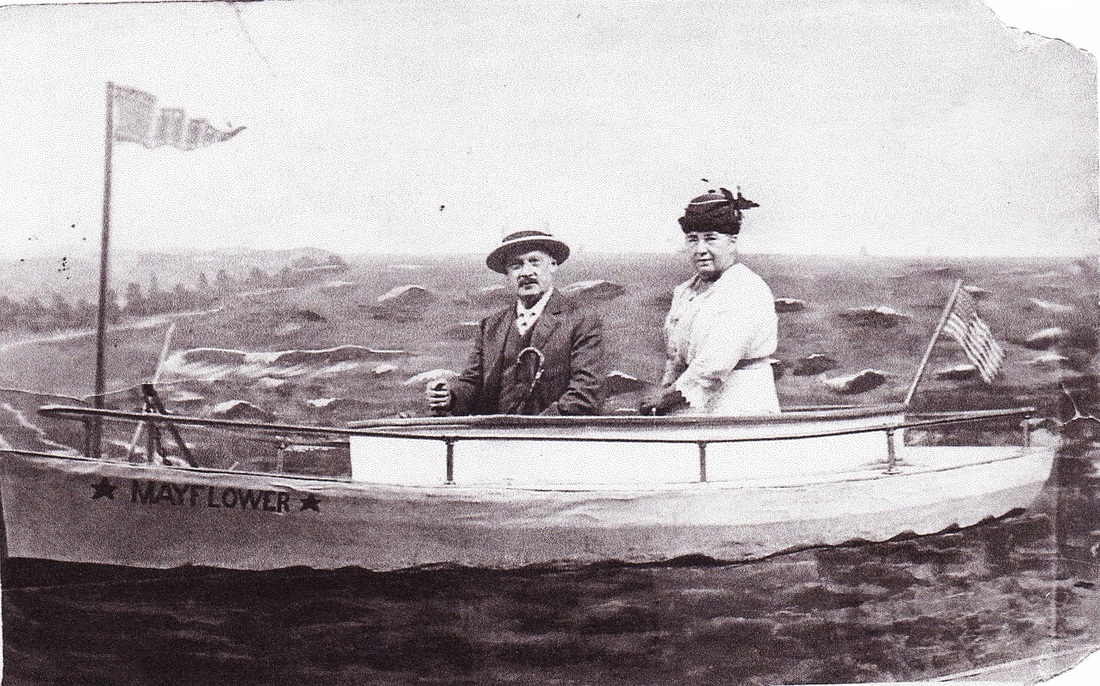 Rudolf and Anna on the Mayflower
Anna and Johann (now John) rejoined Rudolf in 1881 and the family settled in the East Village. In the mid-19th century, the East Village was part of a large community known as Deutschländle, or “Dutch Town”, home to 50,000 German-speaking immigrants of Dutch, Prussian, Bavarian, and Swiss ancestry. The neighbourhood had German schools,churches, synagogues,  theatres, beer halls, oyster saloons, and groceries.

In 1890, the Berneggers were living at 25 Rivington Street. in the lower East Side and were parents to their 3rd child, and my wife’s great grandfather, Edward Charles Bernegger, who was born the 14th of June, 1890.

As the 19th century came to a close, Rudolf continued to frequently move around the East Village; almost every census and directory has him living in a different apartment. Around 1910, the Bernegger family finally moved out of the East Village to an apartment at 163 Southern Boulevard in the south Bronx, where they rented an apartment. Rudolf continue to work as a furrier, selling furs from his own shop for several years.

Rudolf and Anna lived in their Bronx apartment until their deaths, the longest they ever lived anywhere since their childhoods; Rudolf passing at 8:35PM on April 22, 1930 and Anna passing at 11:20PM on November 10, 1934.

Edward inherited his father's financial acumen and became a successful accountant, working for a commercial glassware company. He married Agnes Frank, the daughter of Charles Frank and Elizabeth Martin, both 2nd generation German-Americans, and they had a single child, Joseph Harold Bernegger, on December 2, 1915,

Edward and Agnes moved Ridgewood, Queens where they rented a house at 54-45 Catalpa Avenue, where they lived for several years. Edward was Dictator of the Ridgewood Lodge of Moose and he and Anna were both very active with the group.

Their son, my wife's maternal grandfather, Joe, grew up in Ridgewood, only a few blocks from his future wife, Ethel Tenure. Following in his father's footsteps, he went to New York University, School of Commerce, Accounts, and Finance, received a Bachelor of Science on June 7, 1939, and became an accomplished tax accountant. After completing his degree, he married Ethel on November 11, 1939 and they had 4 children together: Joan, Linda, Edward, and Douglas. Joe worked for the FBI and then became a successful vice president and CFO of Lipton Tea. ​
embeddable family tree updated live from WikiTree

Although the Dutch surrendered to the English in 1664, for most of its history the area was dominated by families of Dutch and French Huguenot ancestry. Some of the families that moved into the vicinity in the late 1600s were named Tourneur, Oblenis, Low, Vleckerands, Hennion, van Vorst, Blauvelt, van Schyven, Baldwin, Onderdonk, Griswold, van Houten, and Lighthizer. Most of these families could easily be traced to the earliest days of the New Amsterdam settlement in the 1500s and they intermarried often.

Russell Elmer Tenure (a name that had derived from Tourneur) was born on October 24, 1893 in Nyack, Rockland County, New York, He had a troubled childhood, his parents splitting up when he was about 12 years old. After a short time in juvenile detention, he ran away from home but eventually returned to New York to live with his brother Percy, who worked as a chauffeur, at 845 Columbus Avenue, 2 blocks west of Central Park.

On December 18, 1912, Russell enlisted in the New York National Guard. Russell worked for a while as a clerk but eventually followed his brother and found work as a chauffeur. He worked for a wealthy New York playboy, sometimes finding dates for his employer.

In 1915, Russell met Mildred Tabor, the daughter of William Tabor and Sadie Simons.

William Tabor, whose original given name was Isidor, was born in 1865 in Pennsylvania to German immigrants. In the mid-19th century Germany, Jews were becoming increasingly integrated into German life and could escape most restrictions if they became baptized into Christianity. Professional Jews restricted in their careers by religious laws often converted as did secular Jews, hoping to better fit into German life. It's possible that William’s family may have converted before moving to America.

Sadie Simons was born in 1867 in Maryland, possibly Baltimore, which had a large Jewish population. Her parents were born in England but the family was originally from Eastern Europe. Large numbers of Ashkenazi Jews had immigrated to England during the 19th century to escape violent anti-Jewish riots and rising persecution in countries such as Russia, Poland, and the Baltics. While restrictions were relatively light in England, allowing Jews to integrate more fully into society, they still existed, motivating many thousands to seek baptism into the Church of England.

William and Sadie  married in 1892 in Philadelphia, Pennsylvania, where their son Frank was born 2 years later, on October 27, 1893. Shortly after, the family moved to Atlanta, Georgia, where they had a daughter, Mildred, in March of 1897. The Tabors then moved to New York City, where they  settled into apartment 397 at 1986 2nd Avenue, East Harlem. East Harlem was an incredibly diverse and dynamic neighborhood, with sizable, thriving immigrant communities of Ashkenazim and Italians. On August 3, 1901, they had their 3rd child, Walter.

The Tabors appeared to have been quite successful and the family moved to the other side of Central Park from Harlem, to the more upscale Upper West Side, to apartment 56, 67 West 101st Street. Around this time, the Upper West Side was a popular neighborhood for well-to-do German Jews. again suggesting that the family may have been still Jewish or, at the very least, had a cultural connection to the Jewish community.

Tragically, sometime prior to 1905, before his 40th birthday, William died, leaving Sadie alone to raise their three children. Sadie must have scrambled to find employment, which she did as a dressmaker. By 1915, the family had moved two blocks east to 52 Manhattan Avenue. The family was living there when Mildred, now 18, met Russell Tenure, age 24, and they started a relationship.

Russell and Mildred married  on August 21, 1915. Russell later described this as a forced marriage and since their first child, Ethel Elizabeth Tenure, my wife's grandmother, was born March 6, a little over 7 months after their marriage, it's possible that their union was the result of the pregnancy. Over two years later, on October 15, 1918, Russell and Mildred had a second child, Franklin, named after Mildred's brother.  On February 23, 1921, their family was complete with the birth  of Edith.

Russell and Mildred had a troubled marriage for many years until they finally separated. However, a divorce in New York at this time was extremely hard to obtain. Having met someone new, Russell was impatient and, on September 28, 1929, he married Rose Ethel Blausten in Long Island City, However, he was still married to Mildred and the marriage was quickly discovered. Months later, he was convicted of bigamy and served a 5 year sentence in Sing Sing State Prison. After he was released, he married Augusta Galmabertz. He died on April 25, 1954 in Rosendale, New York, at the age of 61, and was buried in Tillson, New York.

Meanwhile, Mildred and her children lived with her mother. Sadie, probably with the help of her successful, boxing manager and promoter son, Frank, managed to save enough money to purchase a $9,000 house in a quiet neighborhood at 2409 Cornelia Street, Queens.

After Sadie died on December 17, 1931, Sadie's children sold her house and Mildred purchased a new house at 6057 67th Ave in Queens. a few blocks east. Mildred’s daughter, Ethel, was 15 when her grandmother died. After the move to her new house, she would live only 7 blocks from her future husband, Joseph Bernegger.
embeddable family tree updated live from WikiTree
Copyright © 2014-2022 Davis Simpson