I inherited my HV6a mt-DNA from mother and share it with my brother but not my son.  My mother inherited this mt-DNA from her mother, Julia Debreceni, who inherited from her mother, and so forth.
updated live from WikiTree
When I tested my mtDNA, I found I have eastern Europeans as my closest matches but the Swedes and Finn are close too. On the map below, we can see the distribution of my mtDNA matches. The Swedes can actually trace back ancestry to the 18th or even 17th century while the Eastern European matches appear to be limited to 19th or 20th century ancestry, meaning there could have been a lot of movement in the preceding centuries. 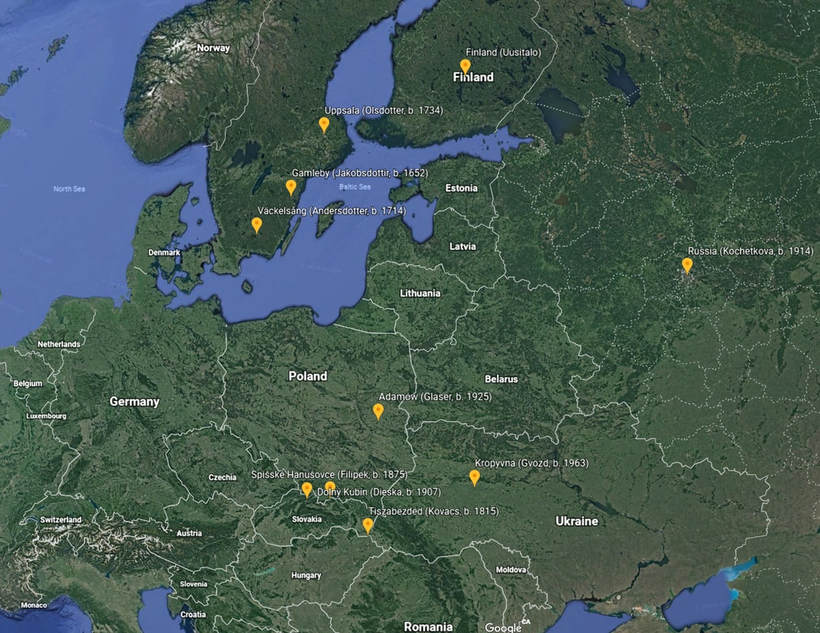 Since mtDNA is inherited only from mothers, this connection goes straight down my female line to Tiszabezdéd, in that small cluster of villages in northeast Hungary. The connection I have with these northern Europeans is certainly several centuries old, perhaps well over a 1000 years old.

​If the Finnish connection on mtDNA and autosomal DNA lines have the same source, and both point to common ancestors who lived long ago, could this connection go right back to the nomadic Finno-Ugric speaking Magyar that settled the Carpathian basin in 895 AD? ​Or perhaps the Swedes settled more recently in these area or some Slavic woman was "relocated" to Sweden?

​A connection here is undeniable but the nature of that connection may remain a mystery for a while. ​
At least 25,000 years ago, my distant maternal ancestor was born somewhere in the middle east. A few thousand years later, as the glaciers in Europe began to recede, her maternal decedents traveled north into the newly accessible land. They brought with them new stone stools and carvings and their culture spread across much of Europe.

My maternal ancestors stayed mostly in Eastern Europe, in the Ukraine and Belarus.  Some of the earliest history of Hungary records that Iranian speaking people from the mid-east settled the region about 4,000 BC, which would be consistent with this DNA.

Interestingly, few people with the HV halpogroup actually live in modern day Hungary, although a few do live around the edges of the country, such the northeast Szalboc region, near Ukraine, where my grandmother's family lived.  Hungary was long occupied by the Ottomans and Hapsburgs, both large, multiethnic empires, which predominately settled in central Hungary so it might be possible that many of the native Magyar were pushed to the fringes. 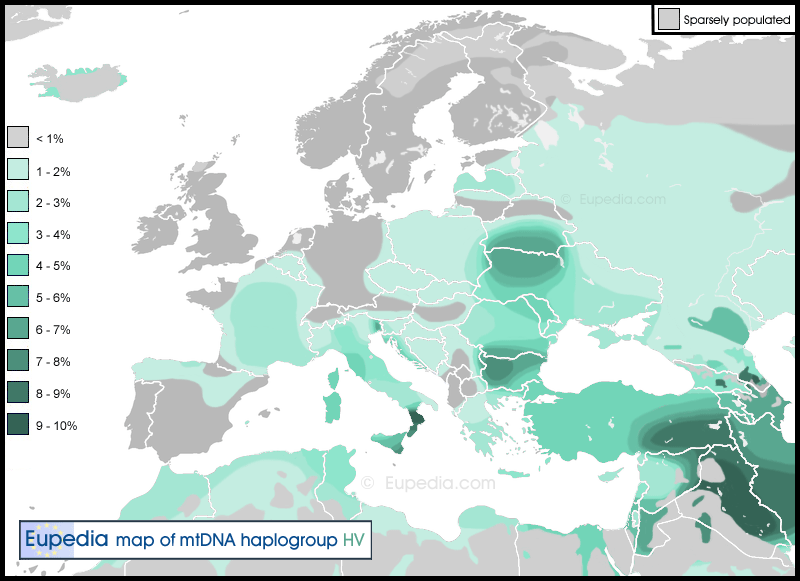