Much of this information is plagiarized from  “Peace and Strife” by Martin Kovacs (my picture is in that book, see if you can find me!), some is gleaned from my grandmother's family bible, the rest is the product of general research.

My Hungarian ancestors come from two different regions of Hungary. The Daku family came from Bezdéd, Záhony, Eperjeske, and Tornyospálca, a cluster of villages nestled in the elbow of the Tisza River, where its course bends from north to south, in 1900, these villages were deep inside the borders of a sprawling Austro-Hungarian Empire. Today, they are very close to the Ukraine border. The Debreceni family came from Karcag, a town of over 18,000 people, located 175 km west of Budapest, 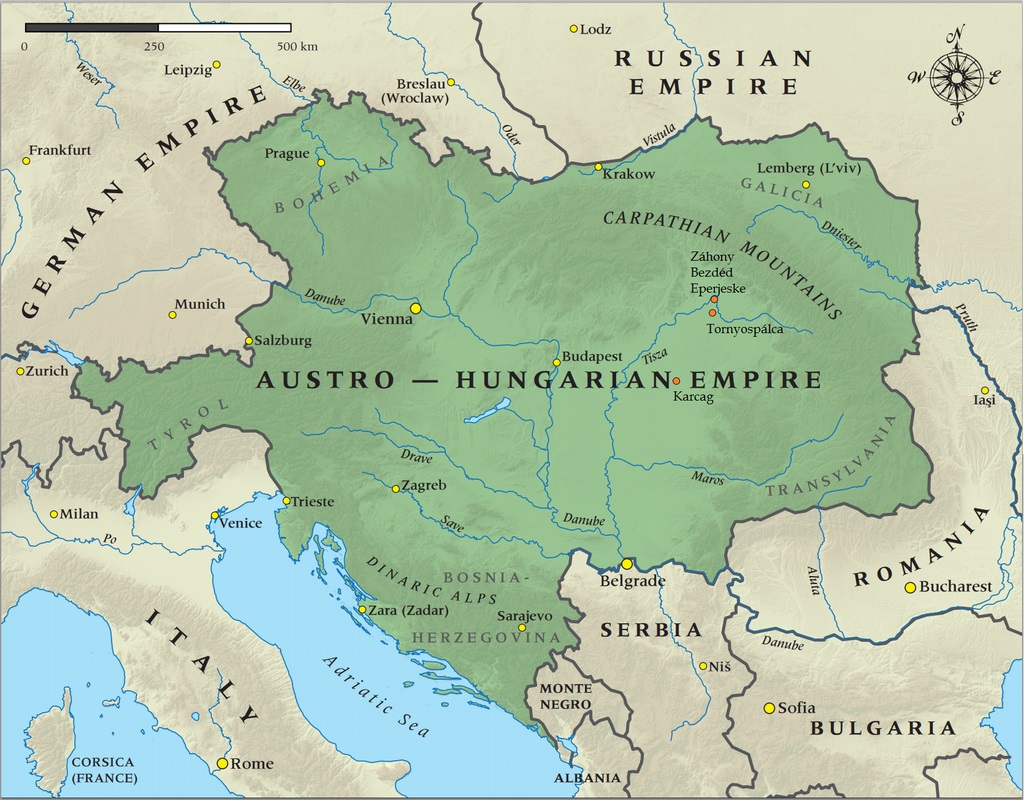 Austro-Hungary - Orange Dots are home of my ancestors
Most of my ancestors were not only farmers but bootmakers and other craftsmen, who belonged to trade guilds and had achieved a moderate prosperity. However, in the 1890s, Hungary was in the midst of an industrial revolution, which had created many disruptions for Hungarian farmers. There was now too little land for their children and the old trades were becoming less profitable. On the other hand, rapid advances in railroads and steamships had made emigration safe and relatively inexpensive.

Sándor (Alex) Daku, was my Grandma’s maternal uncle and adopted father, and my Mom’s much beloved grandfather or “Papa”. Kovac’s book recorded a quote from Alex explaining that it was more than the promise of land that motivated his parents to leave; it was a fear of war and a desire to protect their sons from the draft.

“Farmers used to call in (to my father’s bootmaker’s workshop) to discuss politics and other public affairs. It was there that I heard, for the first time, about the brilliance of Louis Kossuth, the rest of the heroes of the War of Independence, and its events. It was there that I was first told by the pious peasants that war was in the offing. In the first instance, because very many young men had been called up and secondly, because Louis Kossuth had returned from Italy in disguise, in order to visit every community and call upon the people to rise again and fight for freedom.”

So while  my Hungarian ancestors may have been financially secure enough to weather these disruptions, there were also these rumours of war.  As we know, these tensions finally did explode into the cataclysmic Great War in 1914 and Austro-Hungary plunged into nationalistic violence that consumed Europe and shattered the Empire.

The Hungarians sent their sons abroad to many places, looking for their new home. Alex Daku, travelled to New York and then to Pennsylvania, reporting favourably on the opportunities to find work. However, lured by the Canadian offer of a 160 acre homestead for the low, low price of $10, his parents summoned him to Canada.

In 1902, an Hungarian immigrant, Janos Szabo, and others organized a new settlement:Bekevar in the Canadian North West Territories. He  intended the new colony be a Reformed Church or Presbyterian community and it quickly drew in three overlapping waves of immigration directly from Hungary, each from a different region:
​The 2nd wave from Karcag included the Debreczeni family. The Daku and Fonagy families arrived in the 3rd wave.

My great, great grandparents and their families would have travelled by train through Budapest, Vienna, and Berlin to the port of Hamburg. There, they sailed for either New York or Halifax. Some, like Alex Daku, migrated first to New York, still looking for the best place for the family to settle, still uncertain that they would stay or return to Hungary.. However, once the family made the decision to homestead in Saskatchewan, the rest would have all sailed for Halifax.

After a train ride of several days through the Atlantic provinces, Quebec, and Ontario, our families  faced the seemingly endless, mostly empty, prairie. Debarking the train and trekking to their new homesteads, which was only a patch in an endless ocean of grass, the isolation must have been intimidating.

In 1903, there was no Saskatchewan, only the North West Territories, there was no Kipling, it wouldn't be founded until 1909, and the closest city was Regina, which had only 3,000 people.

Bekevar continued to absorb many more immigrants after 1903, of course. The 1916 Canada Census of Manitoba, Saskatchewan, and Alberta enumerated over 5,400 Hungarian-born people in the province of Saskatchewan. The end of the World War brought even more Hungarians, pushing the numbers to over 20,000.