My Uncle Ben tested his DNA and he discovered that his Y-chromosome haplogroup is R1b1b2a1a2d or R-U152. He inherited this lineage from his father, Balint (Ben) Daku, who inherited it from his father, also Balint Daku. His cousin, Jim, went even further and got a more powerful Y-DNA test which indicated the R-U152 subclade as R-Z49,
updated live from WikiTree
Along with half of European men, the Dakus share a paternal mammoth hunting ancestor who died 24,000 years ago in Altai region of south-central Siberia. However, while my paternal forefathers likely pushed west and north, my maternal forefathers stayed in central Europe, where the U152 variation occurred about 4,500 years ago.

The Daku forefathers may have been Alpine Celts who lived in central Europe over 4000 years ago, including in the area of modern day Switzerland, Austria, and northern Italy. The descendants of these particular R-Z49 Celts appear to be most common in southern Germany, southern France, and Italy. Since eastern Europeans have tested far less than western Europeans, its hard to know how widespread R-Z49 is there.

However, while R1B-U152 is rare in eastern Europe, it is very widely spread, meaning that is origins are much earlier than Austrian rule. Many believe that some Celts migrated back to eastern Europe over two thousand years ago, where they flourished for a time. During this time, they often clashed with a people known as the Scythians.

Named by the Greeks, the Scythians were a nomadic people, born from the intermarriage of Siberians and Persians, that often clashed with the Celts in the Balkans. In eastern Hungary, including near Bezdéd, are many Scythian ruins.  Of course, since R1B is rare in eastern Europe today, we know that the Celts did not prosper there for long but intermarriage with the Scythians may have spread the R1B-U152 haplogroup across eastern Europe and the near east.

Below is a map from Europedia which describes newer branches as our haplogroup spread across Europe. ​ 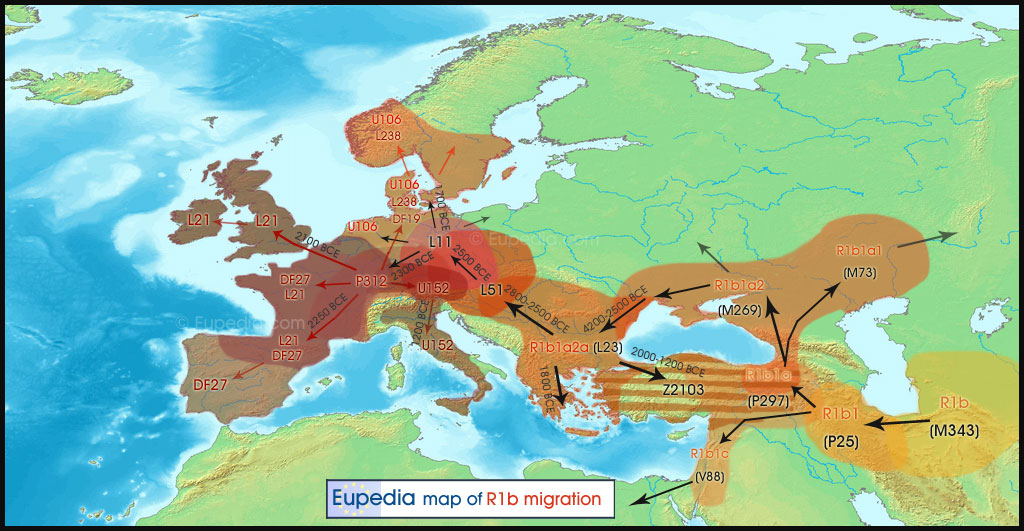