The genetic code of my father exposed that he, like most North Americans, is a mixed breed. He is Scottish, Irish, Cornish, English, and German with even traces of African, and Native American. My father and his two brothers are the children of Lowell Leon Simpson and Grace Merle Lorraine Davis. The Simpson roots stretch back to the colonial days of the United States while the Davis side of the family immigrated to Canada from Ireland, Scotland, and Cornwall in the mid-19th century and from France in the 17th and 18th centuries.

The Simpson name, meaning son of Simon, originated in the 14th century, somewhere in the north of England or the lowlands of Scotland. Since Simon is a Greek name, some have speculated that the name was carried back from the Crusades. Our Simpson antecedents were lowland Scots, scraping out a bleak existence on barren hillsides, repelling Highlander and English raiders, perishing from plague and malaria, squabbling incessantly with their neighbors over the best land, and seeking solace in their ferocious embrace of Presbyterianism.

Nineteenth-century accounts have described the Simpsons as Scots-Irish but that was a label given to any of Scots or northern English background who had arrived in America along with a large wave of 18th century Ulster-Scots. If the Simpsons were Scots-Irish, they may have fled their less than idyllic life in Scotland for the promise of prosperity in Ireland, where English rulers attempted to suppress the eternally unruly Irish with waves of English and Scottish settlers. Predictably, the Irish did not accept these newcomers peacefully and a decade of mutual slaughter quickly convinced the Simpsons to continue their journey.

Whether Scots or Scots-Irish, the Simpsons joined thousands of these men, women, and children and crammed into the dark, damp holds of small, disease ridden ships for weeks or months and sailed across the vast Atlantic ocean to the New World. They may have originally arrived in Virginia but, if they had, they would have quickly discovered that all the best land was already claimed by wealthy and aristocratic planters. However, there was available land in Pennsylvania colony, which still encompassed the lands of Delaware.

Lowell Simpson Ancestor Migrations
William Simpson was our first known Simpson ancestor in America.  On April 13th, 1674, the Duke of York issued a patent to William Simpson for 400 acres in St. Jones County, Delaware, which would become Kent County after the colony was transferred to the proprietorship of William Penn in 1682. This tract of land, called "Simpson's Choice" was situated next to the future village of Little Creek Landing, the home of a thriving oyster industry. Below is a timeline of some of the records that trace the Simpsons in Delaware.

The History of Delaware describes the Simpsons as a "hardy, thrifty class of people, the Scotch-Irish, and were among the first to receive land-grants in the hundred, and in what is now Milford. They have always been among the most progressive of farmers, and have kept their land in a high state of cultivation."

John Simpson Jr. married Mary Hilford, the daughter of Mathew Hilford and Ann Maxwell, the descendants of English and Scottish immigrants. Their eldest son, Clement (1778-1838), married Comfort Dutton (1786-1813) in 1804 and took up a farm next to his father, uncle and brother. The English Dutton family were close friends of the Simpsons and may have been related through the Hilfords. They had migrated to Virginia from England in 1652, moved into Maryland around 1700, before settling in the Broadkill Hundred, just north of the Mispillion Hundred, around 1750.

Comfort died sometime before 1812. Clement then married Comfort's sister, Minty (1791-1844), and they had a son in 1814 and a second in 1815. With a growing family, Clement and Minty needed to acquire more land but Delaware had become too expensive. Meanwhile, the lure of cheap land in the west proved very enticing. The family sold their farm and moved to Ohio, where they settled in Pickaway County and had 4 more children, including Nelson in 1826, their youngest son.
embeddable family tree updated live from WikiTree
Clement died in 1838, when Nelson was just 12 and his youngest sister only 7.  Nelson's older brothers, Thomas and Emery, appeared to have stayed with the family, supporting their mother and younger siblings. The family then moved out to Indiana, where Comfort died in 1844.  Nelson may have joined them for a time but ultimately continued further west to Iowa, where he met and married Rachel Woods in 1858. ​

​The Woods family were Irish, first immigrating to Virginia and then moving west to Indiana, where James Woods married Aumain (Anna) Ritschhart, whose German-speaking father had immigrated from Switzerland. Nelson and Anna were prosperous farmers in Iowa, having several children and grandchildren. However, in a similar situation to his grandfather, he found Iowa becoming far too expensive for his sons to purchase land of their own. Around 1884, the entire Simpson clan picked up stakes and moved to Phelps County, Nebraska.

Named for his uncle, Nelson and Anna's youngest son, Thomas, was 18 when the family moved to the town of Holdrege. In 1890, he married Emma Hethcot. The Hethcots were originally Hathcocks from North Carolina, who had moved there from southwestern Viriginia, where they were a mix of Europeans, free Africans, and possibly Native Americans. When Mark Hathcock moved out to Indiana around 1800, he may have been up to 1/4 African but he was fair skinned enough to be counted as white on the census. In subsequent generations, the knowledge of their lineage was almost entirely forgotten.

Mark's grandson, Nathan Wilson Hethcot, moved from Indiana to Iowa in 1860 where he worked on the farm of James Harper and Alice Shillito. A year later, he wed their daughter, Mary Jane Harper, bought some land and began farming. Nathan was a skilled carpenter and bridge builder and sometimes traveled to neighboring states to offer his services. It was while building a bridge in Nebraska that something attracted him to the state because the next year Nathan moved his family to Red Willow County. His daughter, Emma, and Thomas had several children, including my grandfather, Lowell, in 1907.

Thomas and Emma moved with most of their children to Saskatchewan in 1915. 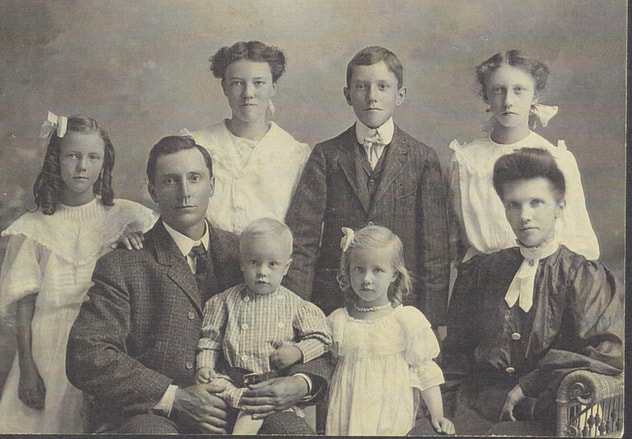 The Davis name, meaning son of David, is the 6th most common name in North America. Of course, I'm not closely related to the vast majority of these Davis's, only a handful from Wexford, Ireland. Much of the story of the Davis family was collected over two decades ago by Garvin Boyle, Margaret Young, and Sadie Robinson, our distant cousins.

Our earliest known Davis ancestors lived in Wexford County, Ireland. However, while Davis is a not uncommon Irish name, it likely doesn't have deep Irish roots, possibly crossing St. George's Channel from Wales in the 17th century, when English rulers imported multitudes of Anglican and Presbyterian British peoples to supplant the Irish. The Davis name is of Norman origin, possibly appearing in Wales sometime after the invasion of 1066. However, the Normans were never large in numbers so while they had a powerful impact culturally, they were mostly absorbed by the native British population.

In 1824, 32 year old Joseph Davis entered into a lease for 104.5 acres in Garrynew with the rent of 119 pounds per year, under the condition that he plant 300 ash or fir trees within 3 years. The lease would would last for his life and the life of his 5 year old son, Joseph Henry Davis. Joseph Henry grew up during a relatively peaceful time in Irish history, the last rebellion defeated in 1798. This allowed him to not only help his father with the farm but also to grow up into a man of some learning.

However, when he was about 11 years old, in 1830,  there was an angry, but relatively non-violent, uprising across Ireland, including Wexford, against the 10% tithe that farmers were forced to pay to the Anglican and Roman Catholic Churches. This "uprising" consisted of wide demonstrations, civil disobedience, and many angry fights and murders. Eventually, the British Crown withdrew the tithe in 1836. However, while the Davis family must have been grateful for the reduction in taxation, they would soon be confronted with the Great Irish Famine.

The famine was the result of a potato blight, which devastated the most plentiful crop in Ireland, a crop on which most subsistence farmers depended. The Davis family were not subsistence farmers, they would have been reasonably prosperous with 104 acres, but the blight would likely have affected them harshly as well. The crop loss in 1845 was between 1/3 and 1/2 of all cultivated acreage but in 1846, it was much worse, up to 3/4 of the crops failed. It was possibly about this time that Joseph Henry, his mother, and siblings decided to immigrate to Canada. Over a million Irish would also flee the island, mostly sailing for the United States. Of those who couldn't flee, over a million died of starvation.
embeddable family tree updated live from WikiTree
Sometime previous to 1848, Joseph Henry crossed the Atlantic in a sailing ship, a journey requiring several weeks of hardship, locked in an swaying, suffocating, overcrowded hold for most of the day, the air thick with the odor of human waste and vomit, only allowed on deck for short periods, eating weevily bread, and subject to a wide range of debilitating diseases. After arriving in Halifax, he traveled east by ship to Montreal, and then further east by train to Elizabeth Town, Leeds County in Upper Canada, which today is known as Ontario.

Grace Davis Ancestor Migrations
Joseph Henry put his learning to use by working as a school teacher. He would need the income because not only was he supporting himself but his wife, Sarah Bolton, and their growing family. Sarah was also Irish, although we do not know if she journeyed to Canada with Joseph or if they met in Canada. After a few years in Leeds County, they purchased a farm near Wicklow in Lanark County, where they had several more children, including Joseph Henry Davis Jr.

Delilah Grace Burlinguet, who went by the name Grace, was the daughter of Charles Berlinguet and Mary Coumbs. Born in Quebec to a large Roman Catholic family,  Charles went to live with his Protestant brother in Ontario while Mary was the daughter of Sampson Coumbs and Grace Cole, who immigrated to Canada from Cornwall, England. Sampson and Grace operated a tavern, brewed their own beer, as well as farmed. Grace married Joseph Henry Jr. in 1880, purchased a farm near their families near Wicklow and had a large family of 10 children.

Their oldest son was Charles Elijah Davis, born in 1881. Charles farmed with his father before moving west to modern day Saskatchewan to make his fortune. He worked for the Prince Albert Lumber Company for several years before opening a livery stable in Prince Albert. Charlie married Emily Campbell in 1909, the daughter of Peter Campbell and Emma McGregor, who were had moved out to Saskatchewan around 1880. Peter and Emma were both the children of Scottish immigrants and devout Presbyterians. Their daughter was equally devout and a dedicated teetotaler. Once, when Peter came home drunk, Emma refused to let him in the house for 3 days, until he had sworn off drinking.

Charlie and Emma moved from Prince Albert to Shellbrook, where they operated another livery stable, and had my grandmother, Grace Merle Simpson in 1915. 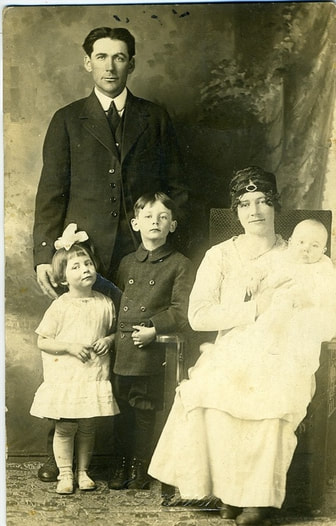